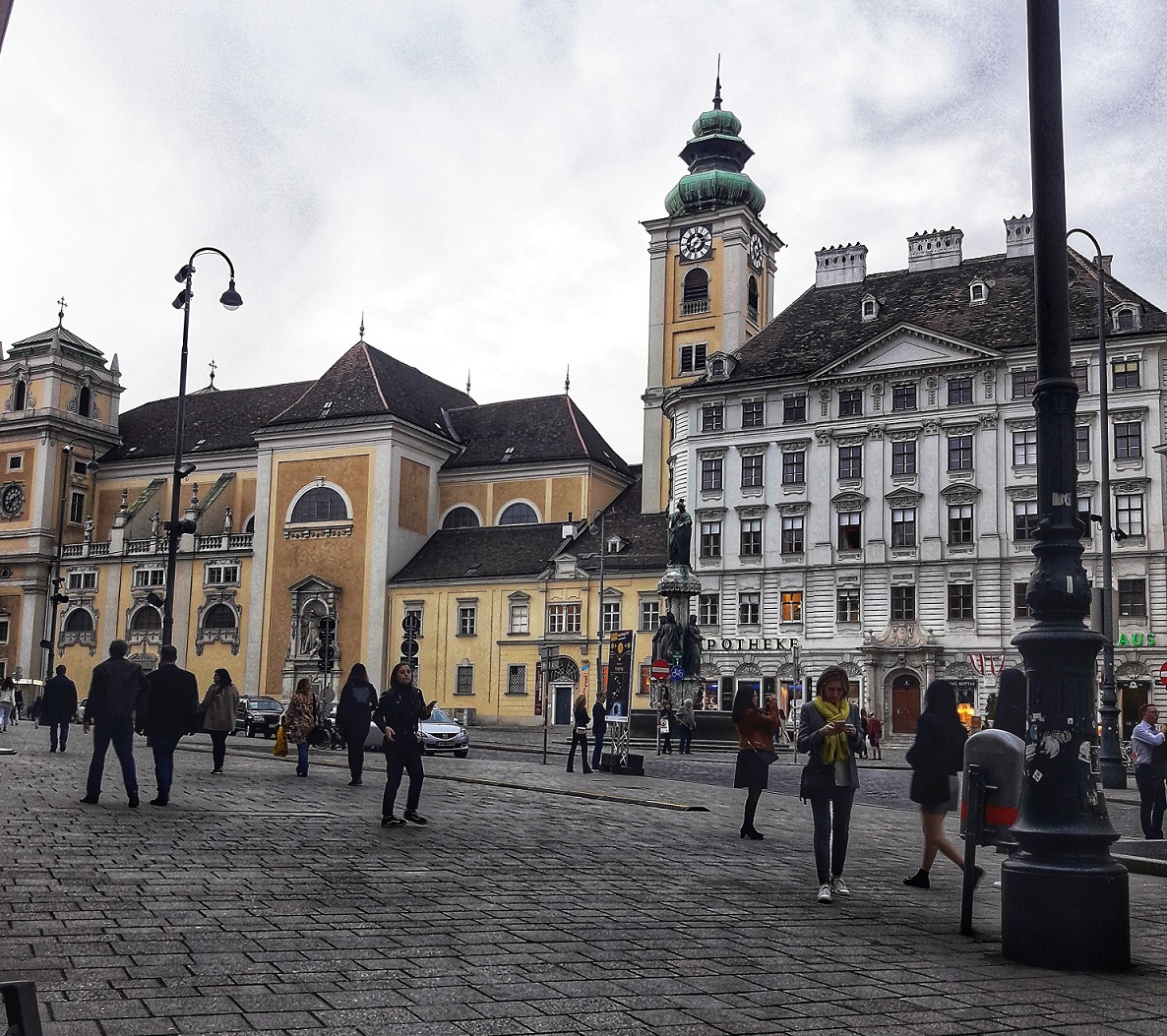 I was in Vienna for the first time 5 years ago in September 2013, when intentionally took a 9-hour stopover to see the capital of Austria. The final destination was Warsaw. Then, from morning till evening, I have visited almost all the important tourist attractions, but I could not feel the atmosphere of the city, enjoy it … Now, in April 2018, the time has come and I have recovered everything –  crossed the center of dozens, visited Belvedere,  I have discovered the impressive Schonbrunn Zoological Garden. So, in conclusion, it was a nice, relaxing city break.

The architecture of the city is impressive. The buildings, palaces are very large, with enormous gardens, with sophisticated decor. All the buildings are kept, it is not destroyed, it is not demolished, and many of it can be seen in reconstruction – to avoid their „loss”.

Unlike last time, this time I saw many buildings under construction, some blocked roads. Taxi drivers say that the number of new buildings has increased in recent years and that the city is changing, but the old style and architecture that Vienna has used to its visitors.

The people in Vienna, including many tourists, are very stylish. You can see them wearing expensive clothes, as well you can see luxury brands stores the center. But it’s nice to go down the street to see so many people, of different ages, well dressed at any hour of the day. And on the heels right on the pavement 🙂

Yes, the center is full of tourists. This is one thing you can not miss in a big city, especially if it’s a popular destination, but if you do not love the crowd – you can walk away from the center, a few hundred meters, and breathe easier, or you can choose a restaurant in a „hidden” yard or a less interesting place for visitors all over the world.

The center is very large, stretched, dispersed. If in some cities (the smallest) you go to the center, it’s a well-arranged marketplace that makes sense that it’s the center, then the center of Vienna is big, full of shops and restaurants, hotels, terraces, museums, historical buildings. At first, you can have the impression that you are rotating on the same street, the same place: D

Vienna is about palaces, many palaces, and big parks. „Great” – I think it is the word that describes buildings that have become historical, cultural, and tourist objectives in Vienna.

In Vienna, often rains. When I was in 2013, in the autumn, every 5 minutes was raining, and every 5 the sun was out and the wind was constantly blowing. Most of those who have been to Vienna several times say they have caught cloudy, rainy weather, but I have had very generous sunny days. It was warm, over 20 degrees, but on some days there was also relatively strong wind, sometimes clouds, but no rain.

All Vienna is about Wolfgang Amadeus Mozart – Austrian composer, and Gustave Klimt – Austrian painter – both known worldwide for achievements in art. From „Mozart” or „Klimt” chocolates – to mugs, shirts, cafes – you meet very often on the streets of the city.

Cafe Central is probably the most popular cafe among tourists thanks to its history and promotion. Looking at Instagram, you will see many images where people stand in line and wait to come in to enjoy the desserts there. That’s how it is, actually. I’ve been around three times in the neighborhood – every time at least 10 people waiting 🙂 I did not insist. And I recommend Cafe Klimt – their specialties are Klimt Tart, Sacher, Apple Struddel with vanilla sauce and Viennese coffee. Too delicious not to go 🙂 Plus, you can find free places 🙂

Vienna was designated in 2018 for the ninth consecutive year the city with the highest living standard. At first glance, this is clear, especially in comparison to Chisinau 🙂 but as a tourist, I do not think you feel what this means, I think the locals know better and feel what this position implies in the ranking.

In Vienna, there is one of the museums with natural size wax figures. There are only a few in the world. In Europe, there are also in London, Berlin, Blackpool, Amsterdam, and Istanbul.

Vienna is an expensive city. More expensive than other European cities, but it is not the most expensive. It is more expensive for tourists because higher prices are where tourist attractions are – you know this 🙂 For example, museum entries are 20-28 euros, still water – 3-5 euro, cappuccino – 3.50 – 5.50 euros. Of course, everything depends on the place, time, but also on other criteria.

Traditional food is the Viennese Schnitzel, which is usually served with a piece of lemon. Potatoes and pork are very popular. Goulash is also very popular. Their food is fairly consistent and wit not too many vegetables :)) but you can easily find restaurants with different types of cuisine. The specific desserts are the Sacher and the Apple Strudel, about the Viennese coffee I told you 🙂

Shopping. All the shops are in the historic center of the city, but as the center is pretty big, the shops are located on several streets. However, you can get all the way down. The biggest problem is that the stores are too „populated” 🙂 And if there are some discounts – it’s disaster: D

Transport. The metro is very popular and probably the most used. Of course, taxis and are also a kind of special „bicycle” with a driver – for two people, but also many horse-drawn vehicles, which start at the Hofburg Palace and tour through the center. A trip costs 55 euros.

If you know English, you will not have problems in Vienna, although it would be ideal to know German, too: D

You can go through the heart of Vienna and meet Moldovans. For example, three students 🙂 Oh, that feeling when you hear that it is spoken in your own language: D

Vienna is the city where you can go by train or boat for several hours to Bratislava, Prague or Budapest.

The airport is about 40 minutes from the city center. From the airport to the city you can go by train.

The currency used, I think you know: D, it’s the euro.

And honestly, I did not really know who the locals are and how they are. Maybe next time… 🙂

If you have some curiosities that cannot be found here, you can write to me on Facebook or Instagram. There is also a post about the places you are eager to visit when you are in Vienna.